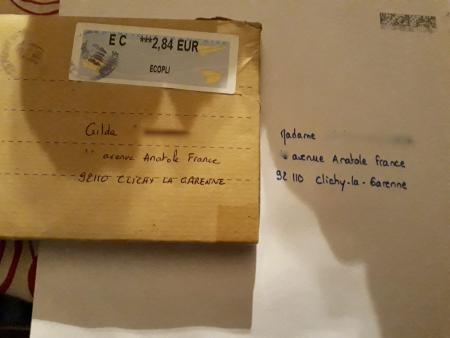 Yesterday evening Célia Houdart was invited to our bookshop : she spoke in particular about the E-1027 mansion where Eileen Gray has lived : one of her novels, "Tout un monde lointain", takes place there.

This early morning the radio woke me up. We usually had our wake-up station left to France Culture, a good program which talk between 6 and 6.25 about books, movies, arts or music. And the first words I heard were from Célia Houdart about E-1027 (1). And so I had the brief feeling I was still dreaming and about the previous evening.

It was beautiful and strange, these few seconds of double time asleep and awake. Some quantum instant.

I've been dining with some friends after a reading around one of my dearest friends work. At some point she told us about a lady, where she has one of her job, which one day pull herself naked right in front of my astonished friend. She said the lady was behaving as if walking naked in front of anybody was the most current thing in our lives.
On my way back I open the book I've been reading, which is the one of Célia Houdart "Tout un monde lointain" and discover that on the morning the last sentence I read was just before these two :


It was precisely the attitude my friend could adopt when the unashamed lady do it again.

Going to this literary event, the one before the dinner, I met by chance one of my closest friends' daughter. She was going in a café to meet some friends of her. I'm quite used to meet people by chance in Paris which is not such the huge big town we can suppose it is. But it was nice anyway.
Where it became something of a wonder has been when on the mechanical scales to go to the metro, late at night we met again, both going back home at the same exact moment.
We had a good laugh.
(and as good french people spoke about what we've just been eating in our different restaurants)

Last : when back home I took the old paper mail in our mail box. There was a book someone sent me and a letter for my daughter sent by her previous boss (for some official end-of-job papers I presume). One came from Nancy the other from Paris, different people. But their handwriting on the envelops was quite the same and not so common.

This friday wasn't black at all but more some thing of a "Journée mondiale de la coïncidence".

As I'm writing about it I still feel quite astonished.

For the first time in nine years 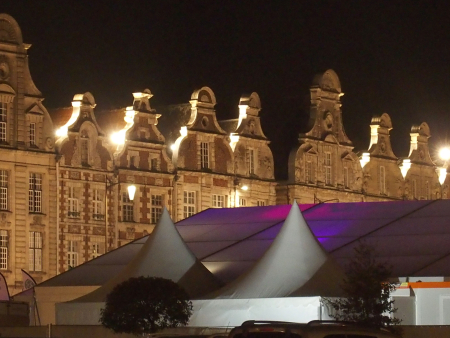 For the first time since I've been taking my holidays during Arras film festival, I've managed this year to write a few words about each movie.

The first years I wasn't trained enough to see many of them and be then able to write : too much emotions, too much exhaustion.

I used to have someone to talk to about the films and several Ciné Club friends were also coming along.

Later there has been years of sad news : some of my aunt's death, the Paris' attacks, Donald Trump's election. And when you have already not much free-time between films, meals and sleep, one only sad news is enough to let you with no energy left to write, except a few postcards for close family and friends.

This year has been perfect for some pieces of writing : a relative loneliness, even if I wasn't alone, no friends from Le Ciné-Club, more restaurants (=> no time lost to prepare meals even simple, very few errands to be done), NO DISASTER, neither private nor collective.
Moreover, "thanks to" the thief who deprived me of my old computer, I work now with a quick brand new one. I was desperately trying to let the previous one work some more months in spite of it beginning to be obsolete and laking of memory and had forgotten how much easier it was with a new one.

Last but not least : since I've begun my triathlon training and thanks to menopause have a lower anemia, my health has much improved. So I'm not the one who slept anytime anymore. I managed to take some half hour each day to write something down.

It's not well written, only ment to keep safe some memories. But I feel childishly proud to manage to keep it till the end.

Blogvember : Let's have a try

Thanks to Franck Paul and a good idea of Nota-Bene,  I discover this new try : writing during november one post in english each day.

I'm not quite sure I'll manage, being in a heavy scheduled all-day-life at the time : bookshop with a beautiful but heavy meetings and signatures program + holidays at a film festival + my mother's house still having to be sold and emptied + the consequences of my computer bag being stolen last wednesday with all my useful things inside, but I feel I've been loosing my english for many years by lack of traveling and V.O. readings, so it is high time to have some practice. Working on it with my friends will be of a good help and maybe incentive enough to bear the lack of personal spare time.

Please be patient with my frenchyssities and spelling mistakes.